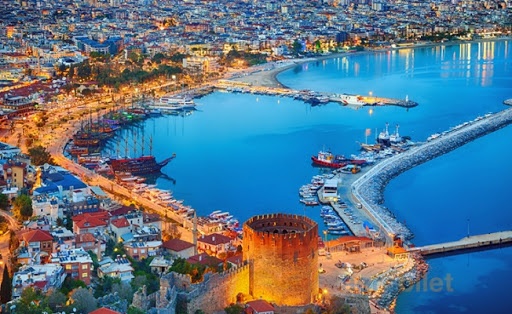 Alanya, Turkey is a tourist town in the province of Antalya in the Mediterranean region. Its distance to the city center is 154 kilometers. The distance to Antalya Airport is totally 135 kilometers. In 2012, Alanya Gazipaşa Airport, which is 45 km away from Alanya, became operational.

History of Alanya It is a rare and beautiful historical city that hosted pirates in ancient times and feudal lords during the Byzantine period and finally became the capital city during the Anatolian Seljuk period. Alanya was located between Pamphylia and Cilicia in ancient times. According to Herodotus, the people of this region are believed to be descendants of people who dispersed to Anatolia after the Trojan war. Alanya took its present name from Mustafa Kemal Atatürk and its real name is “Alaiye”.

Alanya has a very important share not only for the tourism movement of Antalya but also for the tourism of the country. With the tourism investments that started in the 1980s, the district has taken its current form. In the district where apart hotels were concentrated at first, today it hosts many types and types of touristic facilities, including huge facilities. Due to this intense tourism movement, Gazipaşa Airport, 45 km away, became operational in 2012.

Places to visit in Alanya:

- Red Tower in the Port

- Shipyard at the port

Due to these beauties, the demand for Alanya and the fame of the region continues to increase day by day. As Sunset Transfer, we are proud to ensure that you reach the region in the most convenient way with our comfortable vehicles. Our team is at your service 24/7 for reservations and necessary information.