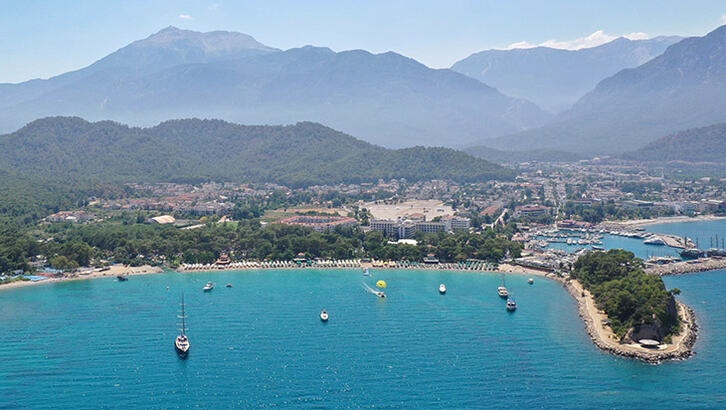 While Kemer was a small village until the early 1980s, which is located 50 km from Antalya city center, at the foot of the Western Taurus Mountains and along the 52 kilometers coastline, it has become one of the most important centers of Turkish tourism with the facilities opened in the last 20 years. After first being a village, then a town, it gained the status of a district in 1991.

because it is not the highway until 1960, transportation just Belt provided the path of the sea, the way the scope of the project Tourism in 1980 after the implementation of the southern Antalya and other infrastructure, attaining the values ​​developed rapidly and has become today one of Turkey's most popular tourist destinations. Settlements such as Kemer Kiriş, Tekirova, Camyuva, Göynük, Beldibi, Çıralı occupy an extremely important place in Antalya tourism.

It is possible to reach the ancient cities of Olympos and Phaselis from Kemer. In recent years, safari tours to high places such as Söğüt Cuması, Altınyaka and Dereköy have also attracted considerable attention. In addition, other attractions in the region are caves. These caves: Beldibi cave is on the shore of the sea 27 km south west of Antalya. There are also prehistoric ruins. Another must-see cave is the Molla hole. It is located on the eastern slope of Tahtalı Mountain rising to the west of Kemer. This cave can only be reached on foot from the villages of Aşağı Kuzdere or Tekirova, which are on the Kemer-Kumluca highway. It is necessary to walk 3-4 hours from both neighborhoods.

Due to these features and also because of its very quiet and calmness, the demand for Tequila and the reputation of the region are increasing. As Sunset Transfer, we are proud to provide you with the most convenient way to reach the region with our comfortable vehicles.