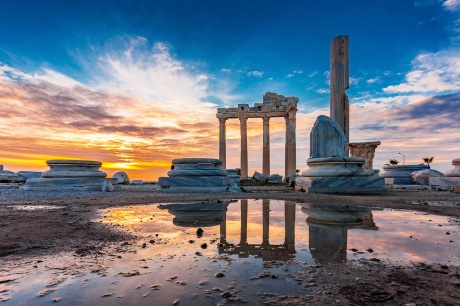 Side is the name of a region in the district of Manavgat, famous for its historical and tourism activities. It is located 80 kilometers from the center of Antalya and 70 kilometers from the Antalya Airport. It is established on a peninsula with a width of 350-400 meters, located 7 kilometers southwest of Side Manavgat.

Side VII BC. century became a settlement center. VI BC. Century, together with Pamphylia, it came under the rule of the Lydian Kingdom, after the collapse of the Lydian Kingdom in 547/46, it came under the rule of the Persians. The city, which preserved its freedom to some extent in this period, minted coins in its own name. Side, which opened its doors to the Macedonian king without any resistance during the Anatolian campaign of Alexander the Great (334 BC), later became one of the great coin minting centers established by Alexander. After the death of Alexander, Side, which constantly changed hands between the Hellenistic period kingdoms, BC III. century, first under the rule of the Ptolemies and in 215-189 BC by the Seleucids. The city mostly had friendly relations with Antiochus III, provided the support of the kingdoms of Pergamon and Rhodes in the Syrian Kingdom, and took sides with the Seleucids with the Side navy in the war against the Romans. When the Seleucids were defeated at the end of this war, Pamphylia and Side were given to the Kingdom of Pergamon according to the Peace of Apameia in 188 BC. On the other hand, Side regained its independence after a while and lived one of the brightest periods in history.

The demand to the Side region, which is 70 km from Antalya airport, continues to increase day by day due to these reasons. As Sunset Transfer, we are proud to ensure that you reach the region in the most convenient way with our comfortable vehicles. Our team is at your service 24/7 for reservations and necessary information.