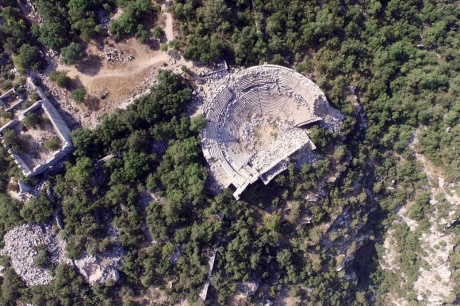 Termessos is an ancient city and a unique monument of ancient times. The city is located in the south-eastern part of the historical region of Pisidia which is 30 km far from Antalya. To get to the city is very difficult. It is located high in the mountains at an altitude of 1050 meter to the south of Mount Gulluk Solum. Termessos ruins for centuries overgrown with dense vegetation, and to this broad royal road on the way to the city turned into a narrow path. About the lost high in the mountains city for a long time no one remembered. Exploring the flora and fauna of the area of the area Goron Edward Forbes in 1842 by accident reminded the world about this unique historical monument. It should be noted that scientists still did not understood well this area. It destroyed trails, streets and houses keep a lot of secrets that is the source for research of archaeologists. Many treasures are buried under the ruins of the ancient city. The first settlement of the ancient city have been known since the 3-rd millennium BC. The city was built in the 6th century BC. e. After some time was established contact with the Lycian city Phaselis, through which residents received free access to the sea. The flowering of the city took place on the 2nd and 3rd century BC. At that time he was an ally of Rome. The Senate gave him independent status and granted permission for independent coinage. All the buildings and structures of the city, which can be seen today are of this period of history. The city is not subjected to renovation or reconstruction. The most powerful earthquake 5-9 centuries have transformed the magnificent city in ruins. These natural disasters disrupted the water supply system, and the inhabitants were forced to leave the city. The story of the legendary monument of antiquity overed. Until now, no one lives in Termessos. Ancient monuments in Turkey managed to survive in that kind as he is in the 9th century AD it was abandoned by the people. Successful strategic position did not allow the city never fall into the siege. The city had its own established system of water supply through which people did not afraid to be captured or to be in the enemy siege. Termessos is a part of the National Park. All the splendor of the mysterious ruins on the background of wild nature and rocks freely open eyes of visitors to the ancient city. Termessos means "high castle in the mountains." Unique built city did not allow the enemy to get inside. On both sides-Western and Eastern city was protected by cliffs, and the entrance to the valley was defended by a strong upper and lower city walls. Entrance to the city passes through the gates built into the walls. To the south of the mountain Solim channels have been found carved into the rock, which stretched for 30 km to Antalya. Presumably on these channels was flowing wine and olive oil. Then it was poured into jars and transported by sea to other countries for sale. Alexander Great moving out of the city Perge to Phrygia was defeated after he tried to capture the impregnable Termossosa. The legendary commander could only arrange arson olive groves near the city. Excursions Between the tombs that were built on the hills, there are sarcophagi and tombs. "Aslan" is the most famous tomb. On the pedestal is installed tomb with reliefs of the head of Medusa, theatrical masks, and other ornamental plants. Another famous tomb of the city is a monument-mausoleum Alchetasa warrior. Hellenistic theater in the area is very unusual. The uniqueness of its structure gives the rock in which it was built. Capacity of the theater is about 4000 spectators. From the top of the theater hill have a nice view of the valleys which begins since Pamphylia till Antalya. There is also a Profilon (monumental gate) Hadrian and 6 temples (Temple of Artemis, Temple Soleteusa, Artemis (2 century BC) temple). How to get there? You can book a tour from a guide or travel agency or just by yourself to rent a car. The city is located in the north west of the center of Antalya province on the road to Korkuteli. Near the National Park "Güllük - Termessos" is a pointer to enter to the territory. It is necessary to turn right and go into the forest. The entrance by car will cost you about 10 lira.