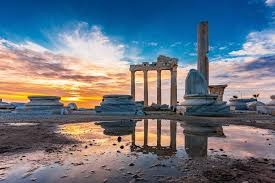 Side is a small town on the peninsula, located 75 kilometers from the main tourist city of Antalya, known as one of the most crowded resorts in southern Turkey. Side is an open-air museum, known as the main archaeological area, carefully guarded by the Turkish Government. Hotels In Side you can find hotels to suit all tastes, from high-level multi-storey complexes to apartoteley. Beaches Beaches are one of the main attractions of Side. Side Resort is located on the green peninsula in one of the most fascinating corners of our planet. The modern resort is organically fit into the historic landscape. Two beaches are located on the east and west side of the cape. Each one has its advantages and features. The beaches are shallow, their territories are equipped with umbrellas with deck chairs. In the western part of the city there are many sandy beaches with hotels, there is always crowded, that can not be said about the eastern part, where the overcrowding of beaches is not so great. On the western beach is always plenty of entertainment for all tastes and ages: water rides, parasailing, water skiing, windsurfing, yachting. In the evening, vacationers are waiting numerous discos and bars, where music will be played till sunrise. In addition to the center of Side, the resort is rich with many beautiful beaches, lately gaining popularity - from west to east - Colakli, Kumköy, Sorgun, Kizilagac and Kizilot.

A special feature is the quality of the beaches of sand and the size of the territory. Holidaymakers eastern part of the beautiful sandy beaches await with modern tourist complex immersed in greenery, side by side with the ruins of one of the oldest and most impressive settlements in Turkey. Orange groves and cotton fields directly adjacent to the beach. Easy to enjoy the scenery and to walk on the sand dunes, looking at ancient ruins. How to get to Side? It is necessary to fly to Antalya, then go by bus to the bus station, from there to Manavgat (journey time is about 1 hour 15 minutes). From Manavgat to Side there are regular buses. Also it can be reached by bus from the Alanya city (journey time is about 1 hour 15 minutes) and Konya (5.5 hours) - and with transfer in Manavgat. Must see City Walls Сity ​​walls in Side are located on the perimeter of the old city ruins. The history of the city walls of Side dates back to the II century BC. The walls that protected the city from enemy attack from the bay were first built and then demolished, then rebuilt again several times and subjected to repair. Now the wall is completely destroyed, so the city walls Side from the mainland - the only thing that remains from antiquity. In the IV century it was built a small number of walls with an impressive design in the three floors. Rows walls towered on the floors. The projections of the walls of the first floor allow the soldiers not to interfere with the soldiers of the second and the third soldiers could safely shoot enemies, without interfering with the previous one. The second floor was also residential. Arched gate The most remarkable monuments built during the Roman Empire.

Side originates behind the high gates of the city, which were built in 71 BC as a sign of respect to the emperor Vespasian and his son and heir Titus. From 9 to 79 AD the city was led by Vespasian. Sculpture of the Emperor kept in the Pergamon Museum in Berlin. The height of the main arched gate is more than 6 meters. Over the long history of the gate strongly changed by repeated injuries, but still remained. Despite its dilapidated state of the gates still amaze visitors with its grandeur and originality. The gates are located between two towers. On either side of the gate there are niches with arches, which are placed before the statue of the emperor and noble people. If you walk through the gate, you can see a huge ancient square and enjoy the view "Nymphaeum" beautiful fountain. Arched Gate, located in the northern part of the city goes to its historical part. The road leading from the gate is considered the main street of the old town. To visit: - Do not miss the most popular excursion to a very beautiful waterfall in Manavgat. - Rent a taxi or car to go to the Aspendos - admire the well-preserved Roman amphitheater before the arrival of organized tourist groups. Temple of Artemis The temple is located in the south of the peninsula, near the sea, and is very close to the temple of Apollo. Both temples were erected at the same time and were dedicated in honor of the chief gods of the city. In antiquity, Apollo personified the Sun, and his sister - Artemis personified the moon. Antalya airport transfer According to Greek mythology, Artemis was the virgin goddess of hunting and young, female fertility and chastity. Artemis was the patron of all life on Earth. She gave couples family happiness and helped women in childbirth. Goddess protect women and children, to alleviate the suffering of the doomed to death. In the eyes of the people it is associated at the same time as the birth and death. The temple walls made of marble.

The height of the temple is 9 meters, the length and width of the rectangular base of the temple of Artemis is 35 and 20 meters. Columns Corinthian parapets. Estimated date of the temple grounds - 2nd century. Among of the temple survived only 5 pillars, but they make such a strong impression that they have become one of the most recognizable and popular symbols of the Mediterranean coast. Ancient Theatre Date of foundation of the theater is the middle of the II century AD. Side keeps the remains of the Roman theater, which seats about 20 thousand spectators. The method of construction of the theater different from the Greeks - on the hillside, and a Roman-style - on level ground, the seat stay on the vaulted arches and arches erected on the foundation. Scene and arches decorated with statues and tiles. To this day survived only - the mask of tragedy and comedy, cleaved the head of Medusa, scattered around the scene. In Roman times here arranged fights gladiators and wild animals, as well as the stage was filled with water to mock naval battles. For safety around the stage built a wall 1.5 meters high. In V and VI centuries, the theater became a Christian church. Side Museum The museum is located on the right side directly in front of the theater. The museum tombs, columns, pedestals, capitals, steles with a variety of architectural features dating back to the Hellenistic and Roman periods. The museum enlisted as a unique for the reason that its collection is located in the ancient Roman baths. In another room, kept dumping the remains of the skeleton, in the third - sarcophagi and statues - some of them are copies.

After the main entrance to the baths, to the left there is a zone, where the works on the reconstruction of exhibits. Nymphaeum Fountain In ancient times, the Greeks constructed a sanctuary in the name of the water nymphs. Sanctuary are presented in the form of semi-circular building with columns, which consist of 3 or 4 floors. Later the name - Nymphaeum - has been retained for a variety of buildings that adorn the city's water sources and building ponds. They were made from artificial or natural caves, and in early Christianity had a function of the Baptistery. An important feature that distinguishes Side from other cities - many ancient cultural monuments have survived - the merit of this is also the protection of the Turkish government. The fountain was built during the reign of Emperor Vespasian and his son. The height of the fountain - 5 meters, width 35 meters. Fountain Located in the north-east of the city, at the exit gate of the city - and it is no coincidence: the first thing that strikes the traveler - the three-storey building in its path. Earlier fountains filled with water from a nearby river reservoir, blowing her aqueduct. Presumably that earlier fountain Nymphaeum, was not a 2-storey as it is now known, and had a 3-storey structure and was very majestic. The fountain was built in honor of the Emperor Vespasian and his son. Judging from the fragments was able to understand that earlier in the architecture used marble, and bowls made of it. This is complemented by beautiful Corinthian columns and statues. Marble was used for facing, and they were decorated with beautiful frescoes, which are then transported to the museum Side. Looking at the remnants of the former heritage much as grandiose fountain was in those days.