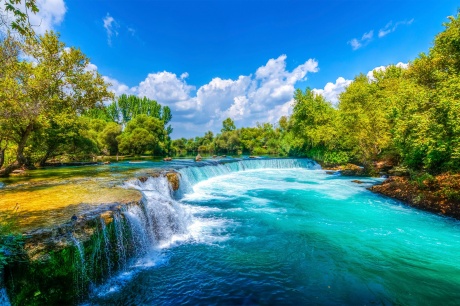 Things to Do in Manavgat and Manavgat Waterfall

Manavgat is a city located between Alanya and Antalya, 5 km from the Mediterranean coast, on both sides of the wide and stormy river. The first built in the territory of Manavgat were in the 6th century BC. The first mention of the city (named Melas) known in 1329. First Manavgat was under the control of the Seljuk Turks in the 15th century and was annexed to the possessions of the Ottoman Empire. Today Manavgat in the eyes of the tourist resort of Side is associated as a resort. City divides river which is going down from the Taurus Mountains. The main natural attraction is waterfall. Accordingly, in the city you can admire not only the sea and river scenery. In a place where the Manavgat River flows into the sea, you can enjoy the temperature change by combining swimming in the sea in warm and the cool river. For sure it is recommended to visit the local restaurant under the shady trees and enjoy the coolness of the waterfall and swim in the invigorating waters of a mountain river. The town is small, Manavgat population is about 100 thousand. The main occupation of the locals is not directly related to tourism. In the area of ​​about 2,500 square meters dominated by agriculture - wheat, oats, barley, cotton, and about 50 kinds of fruits and vegetables. Hotels and pensions  Hotels and pensions located in the city center near the bridge. There are hotels with beautiful views of the river. If you desire you can also settle in neighboring Side, located 10-15 minutes from the city center. Things to do in Manavgat In the surroundings of the city you can admire the magnificent ruins of ancient Side, especially the Roman amphitheater, the city walls, the Basilica and the Temple of Apollo; ruins of ancient Seleucia, walk through the National Park Koprulu Canyon is a real paradise for the true lovers of rafting along the banks, and which neighborhoods are organized jeep safari. Climate The climate is subtropical with cool and rainy weather. The average temperature in summer July 30 + ... + 32, January +13... + 15 degrees. If you wish to come only for the trips, the city can be visited throughout the year. But if your desire to swim in the sea and basking on under the burning sun, it is best to visit between May and October, when the sea water is warm in the summer months it goes up to +26 ... + 28. How to get to Manavgat by yourself The nearest Antalya airport is 76 kilometers far from the city. From the airport to Manavgat can be reached by taxi or bus. Direct transportation is not, so you first need to take a bus or №600 Hawash to the D400 road, on which there is public transport to Manavgat or from the airport takes you to the bus station (Otogar) and there take the direct route to the city you need. Bus timetable from 6:00 to 21:00 every 20 minutes. The distance from Alanya to Manavgat can be reached by bus from the local bus station. The city and nearby attractions better to travel by bus dolmus. Attractions & Entertainment In Manavgat you in any case will not be bored. In the afternoon you can go on hiking and cycling along the sandy shore and coniferous forest, swim in the river or dive with diving, it is also possible to make a jeep safari. On the river you can make amazing rafting trip. If you wish to swim, take the bus to Side and just in 10 minutes you will be at sea. In the evening, for those who likes outdoor activities, can hang out in a nightclub or go for the same purpose to Side, where are much more choice of nightclubs. Places to visit near Manavgat: - Manavgat Waterfall, - Titreyengol lake, - "Köprülü Canyon" National Park, - Dam and reservoir Oymapinar, - The ruins of the city of Seleucia. At the entrance to the city from Antalya there are the hill with a park and an artificial waterfall. Near it are the ruins of the ancient city of Side, where you can see the remains of the Roman amphitheater, the city walls, the Basilica and the Temple of Apollo. You can also go on an excursion on the river on a small boat. Trips are designed for a few hours, and offer the opportunity to swim in the fresh water of the river and salty sea.