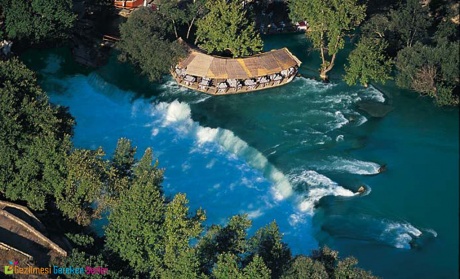 The waterfall is located 4 km north of the city on the river Manavgat in Antalya province. It is located near the resort of Side.Manavgat translates from Turkish language as -"Mother Goddess". Water of Manavgat through which the river stretches is full-flowing and clean, filled with underground springs mountain canyon. Due to the natural water sources of water in the river is relatively cold temperature about 10 degrees. Manavgat River originates from the western slopes of the Taurus mountains, flowing along the slopes of the mountains flows into the reservoir - Manavgat Barazh and Oymapynar. Waterfalls formed in the natural way above the town. The river flows through the city, flowing into the coastal plain and in the end flows into the Mediterranean Sea of Turkish coast. Waterfall was depicted on 5 liras banknotes with the date of manufacture 1968-1983's. Waterfall takes deserved place among Turkey's landmarks that are worth a visit. The streams of falling water are truly fascinating spectacle. Waterfallstands at 5 meters and width is 40 meters. You can visit the cozy restaurant surrounded by greenery falls under spreading trees, where to you will be offered to taste the freshest trout. Nearby the waterfall there are small markets. There you can purchase a variety of souvenirs, gifts and Turkish eastern sweets. How to get to the waterfall? From the bus station there are direct buses to Manavgat, which goes directly to the waterfall. In the center of the city bus with sign Şelale (Shelale) also will bring you to the address. "Turtle beach'' in Dalyan Turkey  Iztuzu Beach is a real pride of Turkey and serves as one of the most rare and beautiful corners of our planet. This is one of the rare places in the world where, thanks to sea turtles species "Caretta-Caretta" beach has received the status reserve. Turtles swim here from distant Galapagos Islands. Unique natural oasis is located about 13 km from the town of Dalyan ( from Turkish language it means "the creek to catch fish"). Across the city are the straits with rivulets, so Dalyan sometimes called "Turkish Venice." It is a small Turkish with population no more than 8 thousand. The location of the city is very interesting - on the Dalyan River, linking freshwater lake Köycegiz with the Aegean Sea. The climatic conditions of the city is quite comfortable. Winter temperature hardly drops below 12 degrees Celsius, and the summer - an average of 29 degrees. This town is so fond for the British and German retirees because from the river always breathes coolness and freshness. The mild climate creates favorable conditions for the growth of rough plants. Here in the area of Dalyan for example grows about 100 species of trees and amber wood, as a rare species plants in nature. Hundreds of sea turtles are sailing to the sand beach Iztuzu with a purpose to lay their eggs. A turtle can lay up to 150 eggs, and survive only a few turtles. The adult powerful turtle weighs 50 kilograms. Turtles "Caretta-Caretta" are the oldest creatures in the world. Their size ranges from 115 to 150 cm, weight 70 to 90 kg. Carapace brown colored and the belly is bright yellow. Turtle lives about 70 years. Their meat is considered a delicacy so they have been over-fishing, which has led number of population to the critical point. In order to keep these unique creations the beach is closed during the period when turtles laying eggs. Nature reserve has sulfur mineral springs, and a mud bath. Thermal springs of this region is not only the hottest and the most useful. They cure almost all diseases. How to get there? From the town of Dalyan to Turtle Beach " you can go by car or bus. But it will be the most nice if you take a fascinating tour of the Dalyan River on a yacht or a boat.